Welcome to the Largest Battery Fair in the World

China Industrial Association of Power Sources will hold the "14th China International Battery Fair(CIBF2020)" on May 25 to 27, 2020 in Shenzhen Convention and Exhibition Center. CIBF2020 will be accompanied by the 5th China Energy Storage Exhibition and 3rd China Power Bank Exhibition.

For CIBF2020, the exhibition area is 105000 square meters, the number of exhibitors will be up to 1350, the number of booths will be over 5500. CIBF2020 will focus on the global 3C battery, power battery, energy storage battery, various battery materials, manufacturing equipment and system solutions, with a special focus on the series of achievements in the field of new energy passenger bus, passenger cars and logistics vehicles in our country in the last two years. The theme of CIBF2020 technical conference will be “power batteries and energy storage batteries", focusing on electric vehicle batteries and micro-grid, smart grid and energy storage battery with a variety of the latest developments. There will be 1500 people from more than 50 countries and regions attend the meeting.

CIBF2020 will be a trade platform for battery manufacturers and users to exchange ideas on new technology, to expand their markets and promote their products and services to customers in the worldwide marketplace.

(1) Exhibitors are requested to go to the CIBF official website (www.cibf.org.cn) for registration during the confirmation exhibition and to choose the booth through the online booth map;

(2) An online participation contact will be generated within 5 workdays after CIAPS received the exhibitor’s application. Please download and stamp. Please remit the booth fee to the designated bank account within 10 workdays. The exhibitors need to fill in the CIBF2020 application form and email it to

(3) Organizer will make out an invoice after receiving exhibitors’ remittances within 30 working days (the day will be automatically extended for one week for holidays or at the beginning/end of the month ), and express it to the exhibitors;

CIBF2020 technical conference will be named as “China International Conference on the Frontier Technology of Advanced Batteries, CIBF2020”. Please see the technology conference announcement on website for more information.

1．Catalogue advertising: CIAPS will edit and print the Catalogue CIBF2020 in Chinese and English, which will include exhibitor information, agendas of the exhibition and conference. The printing quantity is 10000. Both of exhibitors and non-exhibitors can advertise in the catalogue and exhibitors can enjoy 20% discount.

Any question about the exhibition, conference and advertising, please contact:

China Industrial Association of Power Sources is the organizer of China International Battery Fair (CIBF). The CIBF is a battery industry international regular fair, which is held biennially in China, and has become the largest battery fair in the world. CIBF includes exhibition, technical conference and procurement fair. CIBF is the first registered trademark exhibition and approved by the State Administration for Industry and Commerce Trademark Registration on Jan. 28, 1999, and re-approved in 2009.

CIBF2018 Technical Conference---China International Conference on the Frontier Technology of Advanced Batteries were hold on the fifth floor of Shenzhen Convention & Exhibition Center in May 22-24, 2018, focusing on the latest progress of electric vehicle batteries and smart grid energy storage battery, display and released the global battery industry the new theory and technology industry breakthrough. More than 55 top experts at home and abroad have been invited to give a keynote speech. More than 1300 industry experts, scholars and entrepreneurs from more than 50 countries and regions have attended the meeting.

At the same time, the organizers also invited more than 80 battery buyers from more than 30 countries to visit the exhibition, and held the international battery buyers purchasing fair at the scene with the battery suppliers.

Characteristics of TOP100 enterprises in 2018:

(2) Lead-acid batteries were still in great demand in automotive start, electric bicycles, electric tricycles, low-speed electric vehicles, electric forklifts, communications, new energy storage and other fields, but the total output growth rate was only 2% in 2018. The concentration of lead-acid battery industry had been further improved. There were more than 340 lead-acid battery enterprises in China. Because of the consumption tax levied, the profit of enterprises was compressed, and the survival of enterprises had more pressure. Some enterprises had increased their distribution in Vietnam, India and Central Asia, expandedtheir overseas production and intensified their efforts to develop international markets.

Power battery enterprises had a strong desire to reduce cost in short term. They would like to be compensated as much as possible by ‘cost reduction’ measured such as upstream separator, electrolyte, cathode, anode, as well as ‘efficiency enhancement’ measured such as increasing energy density, standardization. In the next 3 to 4 years, it will be the most difficult period for upstream and downstream enterprises of power battery industry chain. Especially in cost reduction, upstream and downstream enterprises will face unprecedented challenges. The whole industry chain need to cooperate together to overcome difficulties. Enterprises rapidly expand and occupy the market through comprehensive advantages of product cost performance ratio, but also to maintain a reasonable cash flow in order to ensure the normal

operation. The quality and safety should be the first for power battery enterprises, otherwise enterprises have to pay huge cost. Only with strong technology accumulation, sufficient financial support, cost-effective products, and faster response marketing, enterprises could lead in the fierce market competition in the future and win the market. Enterprises should catch the opportunity of ‘Belt and Road Initiative’, international capacity cooperation, establish an international R&D institution, carry out overseas layout, brand cultivation and other high-end links in the industrial chain should be transferred to accelerate integration into the globalmarket. 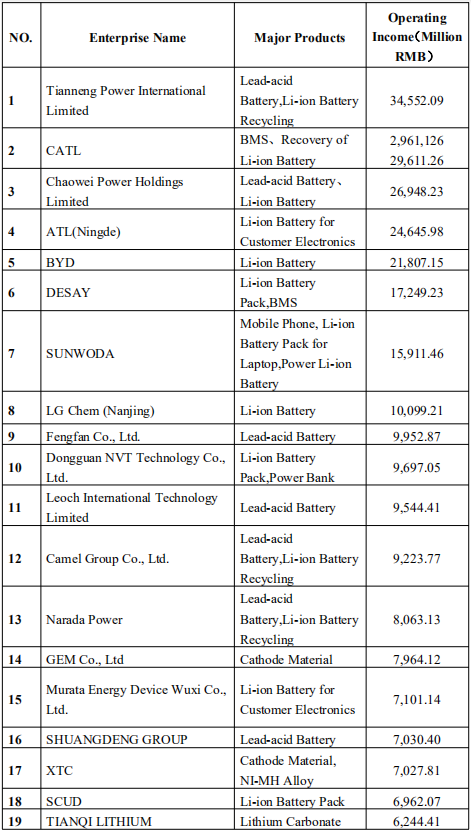 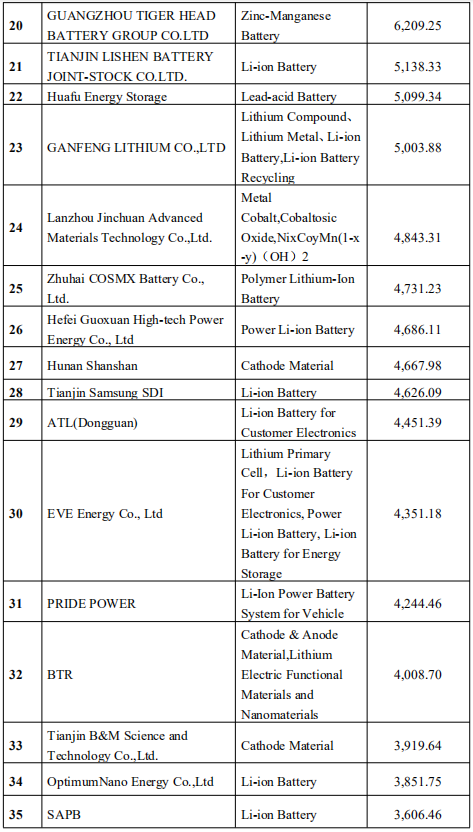 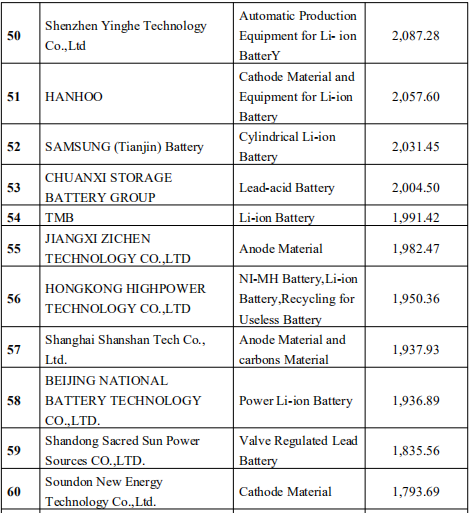 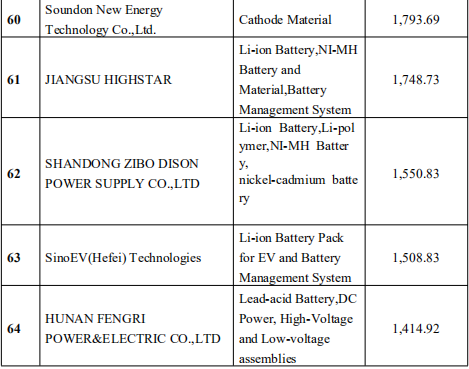 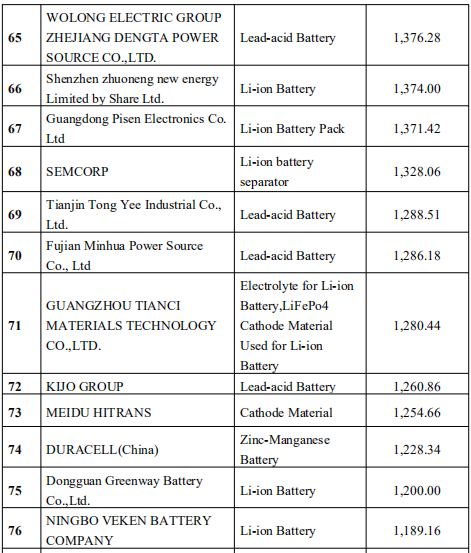 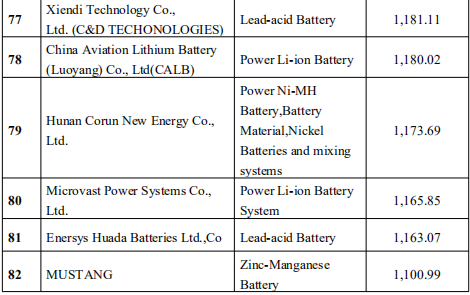 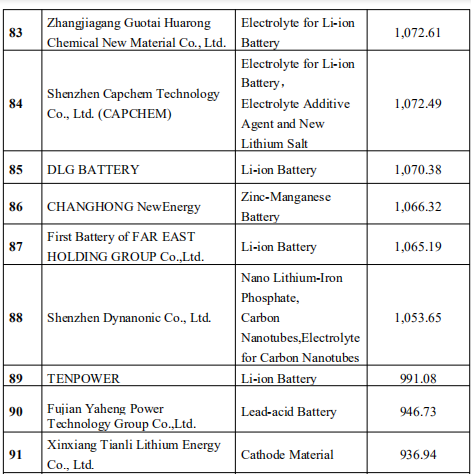 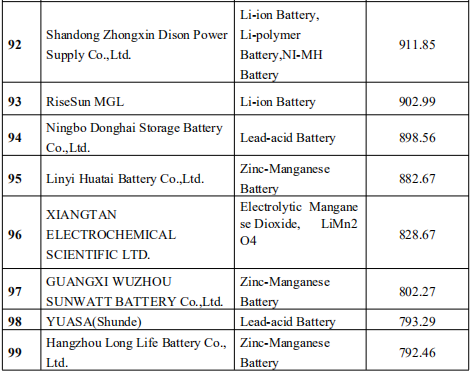 ①￥ is a symbol of Chinese currency